The knee joint is the largest and one of the most important joints of the body and is often the site of pain and injury in athletes It is a major weight bearing joint of the body. The knee functions to allow movement of the leg and is critical to normal walking. The knee flexes normally to a maximum of 135 degrees and extends to 0 degrees. It is made of three bones. The knee is a hinge type synovial joint, which is composed of three functional compartment. This type of joint allows only one directional movement. On the top is the thigh bone (femur) below it the shin bone (tibia) and in the front is the knee cap (patella) which covers and protects the front of the joint, it is the protruding structure you see when you extend your knee. This structure slides along a groove on the femur. It plays an essential role in movement related to carrying the body weight in horizontal (running and walking) and vertical (jumps) directions.
The part of the femur that forms the knee joint is expanded side ways and behind to form two oval structures called condyles. Similarly the part of the tibia forming the knee is expanded and forms two condyles that articulate with the corresponding femur condyles. The one on the outer side is called the lateral condyle and the one on the inner side is called the medial condyle. On the front the patella articulates with the femur. 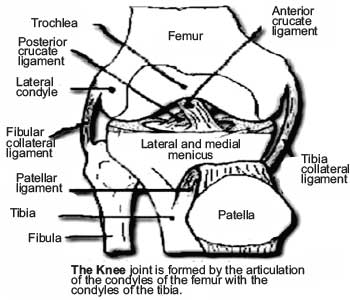 There are several large fibrous bands of tissue called ligaments, comparable to that of a rope. They support the knee on both sides and front to back. Ligaments connect bone to bone. They provide strength and stability to the joint.
The four ligaments that connect the femur and tibia are:

The knee joint is surrounded by a joint capsule with ligaments strapping the inside and outside of the joint (collateral ligaments) as well as crossing within the joint (cruciate ligaments). The collateral ligaments run along the sides of the knee and limit the sideways motion of the knee.
There are two basic groups of muscles at the knee. In the front of the knee are the quadriceps muscles that work to straighten the leg out. In the back of the knee are the hamstring muscles which help to flex the knee.
The ends of the three bones are covered with articular cartilage. This is a tough elastic material that basically cushions the joint that acts as shock absorbers. Also helping to cushion the knee are two C-shaped pads of cartilage called menisci. They lie between the tibia and femur. There is a lateral mensicus and a medial meniscus. The meniscus is a thickened cartilage pad between the two joints formed by the femur and tibia. The meniscus acts as a smooth surface for the joint to move on, also a shock absorber and enhancing the stability to the joint. The knee joint is surrounded by fluid- filled sacs called bursae, which serve as gliding surfaces that reduce friction of the tendons. Below the neecap, there is a large tendon (patellar tendon) which attaches to the front of the tibia bone.
The joint is bathed in synovial fluid which is contained inside the synovial membrane called the joint capsule. In a normal knee joint, a synovium (synovial membrane) surrounds the knee joint and it produces synovial fluid that nourishes the surrounding cartilage in the knee. The synovium also functions in protecting and supporting the joint due to its tough outer layer.
The bursae, or fluid-filled sacs, serve as gliding surfaces for the tendons to reduce the force of friction as these tendons move. Each meniscus serves to evenly load the surface during weight- bearing and also adds in disbursing joint fluid for joint lubrication.