Rheumatism refers to pain, swelling, stiffness in and around joints, bones, muscles and soft tissues around them. So far, we have discussed a lot about inflammatory arthritis in past issues of MAI. I will be focusing on soft tissue rheumatism, fibromyalgia syndrome. It is not a new condition but known by different names myofascial pain, myofascitis, etc.

The term "fibromyalgia" derives from New Latin, fibro-, meaning "fibrous tissues", Greek myo-, "muscle", and Greek algos, "pain"; thus the term literally means "muscle and connective tissue pain". Fibromyalgia is estimated to affect 2-8% of the population with a female to male incidence ratio that is somewhere between 7:1 and 9:1. It is most commonly diagnosed in individuals between the ages of 20 and 50, though onset can occur in childhood. Fibromyalgia (FM or FMS) is characterised by chronic widespread pain and allodynia (a heightened and painful response to pressure). In 1990 American College of Rheumatology published the classification criteria and the term fibromyalgia is now used extensively.

The exact cause of FMS is unknown but is believed to involve psychological, genetic, neurobiological and environmental factors. There is evidence that environmental factors and certain genes increase the risk of developing fibromyalgia - these same genes are also associated with other functional somatic syndromes and major depressive disorder. The central symptom of fibromyalgia, namely widespread pain, appears to result from neuro-chemical imbalances including activation of inflammatory pathways in the brain which results in abnormalities in pain processing. Stress may be an important precipitating factor in the development of fibromyalgia. Poor lifestyles including being a smoker, obesity and lack of physical activity may increase the risk of an individual developing fibromyalgia. Sometimes FMS can be secondary as part of few inflammatory conditions like Rheumatoid arthritis, SLE.

The defining symptoms of fibromyalgia are chronic widespread pain on both sides of body above and below waist lasting for more than 3 months. Pain is described as burning, aching or soreness, present throughout the day, the location and intensity may vary,. Physical activity worsens the pain or it can be spontaneous Apart from pain the patients complain of fatigue which is worse in mornings and early evening and affects the ability to perform daily activities ,sleep disturbance, and heightened pain in response to touch, pressure (allodynia) tingling of the skin (paresthesias), prolonged muscle spasms, weakness in the limbs and muscle and functional bowel disturbances.

0-50 % patients with FMS suffer from significant depression or anxiety .Anxiety can make symptoms of pain, stiffness worse. Depression is often accompanied by fatigue, high pain score, and poor sleeping quality. The patients describe problems with cognition, inability to concentrate, memory problems and difficulty in learning new tasks .All this leads to a great impact on functional abilities and quality of life including work, home and social relations. The diagnosis of FMS is often delayed as there are no objective tests for diagnosing the condition .But detailed clinical evaluation is important. There are 18 points suggested by ACR as shown in the diagram. If patient shows tenderness on the pressure, on minimum 11out of 18 sites the diagnosis of FMS can be made. Some laboratory tests are done to exclude certain conditions like RA, Connective tissue disorders, myopathies, thyroid problems, malignancy etc. Red flag signs are weight changes, fever, joint swelling, muscle weakness, skin rashes etc.

FMS is neither progressive nor fatal. Most studies show that treatment can significantly improve symptoms, function and quality of life, if diagnosed properly. The major treatment goal in FMS is to empower the patient to regain control over his/her life by having a positive attitude and cope better with the stressful condition. A combination of education, non-pharmacological and pharmacological therapies is needed to achieve this goal.

Simple analgesics like paracetamol, mild opioid analgesics tramadol are used for pain relief. Corticosteroids are not indicated .Antidepressants like amitryptiline, pregabalin are also recommended. Cognitive behavioural therapy (CBT) and related psychological and behavioural therapies have a small to moderate effect in reducing symptoms of fibromyalgia. The greatest benefit occurs when CBT is used along with exercise. Graded aerobic exercise improves fitness and sleep and may reduce pain and fatigue in some people with fibromyalgia.

Thus one needs to pay attention to all that aches and pains, diagnose FMS as early as possible and treat for a better prognosis. 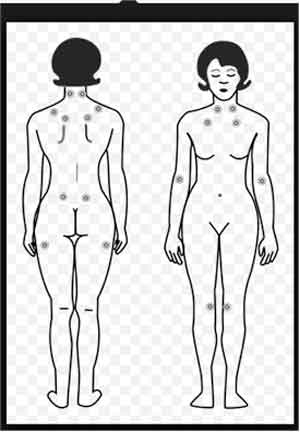