The term "soft tissue rheumatism" is used to describe a group of conditions that cause pain, swelling, or inflammation in the soft tissue around the joints – tendons, muscles, bursas, and ligaments. Ultrasound imaging is non-invasive and does not involve ionizing radiation , high frequency ultrasound probes ( 5Mhz to 11Mhz) can provide useful information of soft tissues around the joints to diagnose and treat Rhematological conditions.

Inflammatory overgrowth of synovium (Pannus) around joints is the hallmark of Rheumatoid arthritis. These soft tissue changes can be seen around MCP joints , PIP joints and styloid process of ulna. Ultrasound can show synovial hyperaemia , synovial hypertrophy with destruction of articular cartilage and in later stages erosions and joint space narrowed. Important role of soft tissue imaging in RA of the hands and wrists is to exclude septic arthritis. Percutaneous ultrasonography-guided aspiration may be useful for localizing and obtaining samples of any collection that can be found. 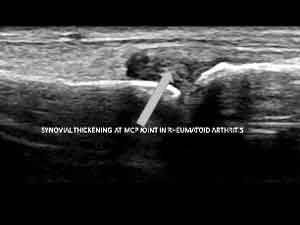 Rheumatoid nodules around the PIP joints can be seen as hyperechoic or hypoechoic nodules on ultrasound . 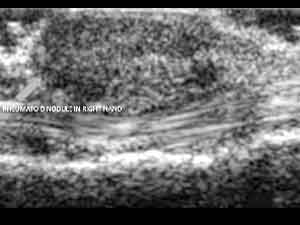 Gouty trophi seen in gout involves deposition of sodium urate crystals in and around the small joints causing inflammation and swelling of soft tissues. The first MTP joint in foot is most commonly involved. Ultrasound findings include tiny hyperechoic foci of
( 1mm to 3mm ) of soft tissue trophi and central acoustic shadow representing centrally located crystal. Ultrasound guided aspiration of the joint fluid is useful in confirming the presence of urate crystals. 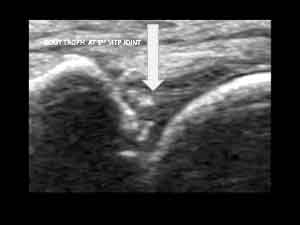 Bursitis on Ultrasound may reveal a small anechoic fluid collection in the intermuscular plane near the shoulder or knee joints commonly . Small floating echogenic debris in these conditions indicates long standing disease. Ultrasound guided aspiration can also be carried out. 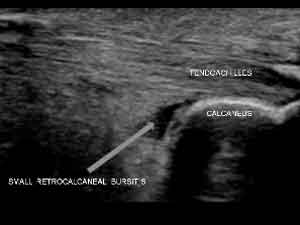 Baker"s cyst ( Popliteal cyst) is a fluid-filled distended synovial lined bursa arising between the gastrocnemius and semimembranosus tendons via a communication with the knee joint . They are usually located at or below the joint line. Ultrasound findings include an anechoic fluid collection with thick septations and floating echogenic debris .The cyst has a neck at its deepest extent as the cyst arises from the joint . No increased vascularity in the septae noted. The main differential diagnosis for Bakers cyst is Deep vein thrombosis and ultrasound with color flow doppler is useful in diagnosing Baker"s cyst and exclude Deep vein thrombosis in cases of sudden onset of pain in calf. 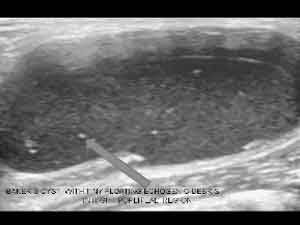 Tenosynovitis on ultrasound can reveal anechoic peritendinous fluid collection or fluid streaks with thickened synovium. The tendons may appear hyperechoic and thickened on ultrasound . Tendon tears may be seen which appear as small linear anechoic slits in tendon in early cases and complete disruption in severe cases. Tenosynovitis can occur in Rheumatoid arthritis an Psoriatic arthritis. 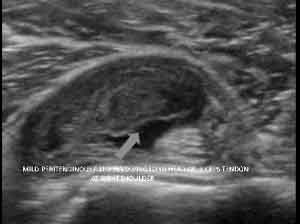 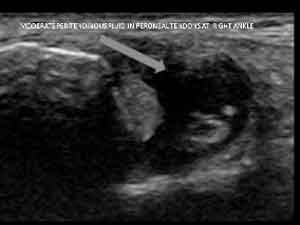 Calcific tendonitis occurs in the periarticular regions commonly around the shoulder joints involving the supraspinatus tendon. Ultrasound findings include coarse echogenic calcific foci in the tendon.

Tendon ruptures may be seen in Rheumatoid arthritis. Ultrasound shows linear hypoechoic lesions in partial tendon tears, the affected tendon may also be buly and heteroechoic in appearance. 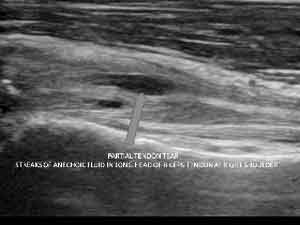 4. Dixey J, Solymossy C, Young A et-al. Is it possible to predict radiological damage in early rheumatoid arthritis (RA)? A report on the occurrence, progression, and prognostic factors of radiological erosions over the first 3 years in 866 patients from the Early RA Study (ERAS). J Rheumatol Suppl. 2004;69 : 48-54