The contents of this article, are related to those conditions, which often need surgical intervention, for its treatment. The other conditions are excluded, to keep the discussion related to surgery. Most people suffer from back pain, some time or the other in life and is the second common site of pain, next to headache. Having a pain in the back is often disabling, with loss of quite a few working days and is also a financial burden on the family. In earlier years, when the diagnostic tools were lacking ( which we realise now, having many things like ultrasonography, various types of imaging techniques like CT & MRI scan etc ) , it was more of a clinical acumen to diagnose the cause of pain in the back. Currently, imaging techniques like CT and MRI scans, Image intensifier X ray machines and Nuclear scans have made it possible to diagnose relatively early and in most of the occasions, quite accurately. To take an overview of surgical aspects of spine surgery, it is necessary to know some basic facts of these conditions and hence are included here.

THE STRUCTURE OF SPINE: The spine is an architectural marvel in human body. It has :

With advancing age of a person, some age related changes do occur in the spinal column and evoke symptoms in the limbs. In the middle age, mechanical stresses may cause displacement of the contents of the disc, causing pressure on the nerves and hence pain in the limbs. The spine being a part of the body, other diseases viz. infection like tuberculosis, tumours â malignancy or congenital abnormalities may also occur.

HOW DOES A CLINICIAN (medical practitioner) EVALUATE A CASE AND Some facts..

Diagnostic tests: After obtaining history, a clinical physical examination is done and usually the clinician, is able to make a provisional diagnosis, as to the cause of the pain in the back. The list of various cause of pain in the low back is very long and here we would see a few common causes of low back pain, which one comes across in clinical practice and often require surgical intervention. 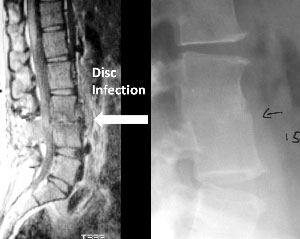 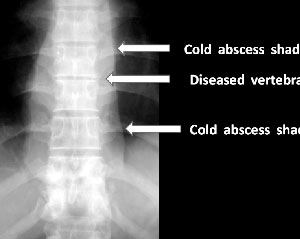 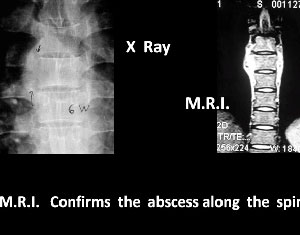 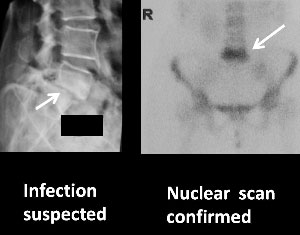 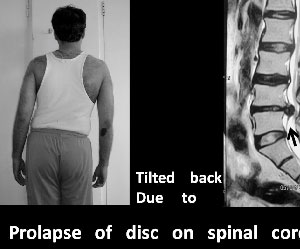 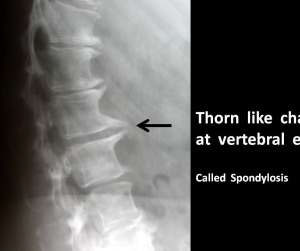 IN GENERAL: In general a person with disc prolapse ( sciatica) is usually a physically fit person, while that suffering from a tuberculosis of spine or tumour (either a primary or a secondary tumour) is not so. Those having degenerative disease of the spine, are also fit, but with some stiffness in the spine, with restriction of movements. TREATMENT OF ABOVE: In congenital defects (Spondylolisthesis means 'Slipping of a vertebra over the other') of vertebrae, usually, forward bending exercises by toning up flexors of the spine muscle and use of a corset (belt support ) helps to reduce the pain, by offering support. If such conservative method fails after adequate trial, one considers stabilisation of the spine by fusion of the affected vertebrae. About two decades ago, the vertebrae were fused by insertion of bone grafts and one had to take rest in bed for two months at least, till the vertebrae fused together, offering stability to the column. However, currently surgical technique have improved and mechanical stabilisation with metal devices called implants, permits early movements in and around the home, with an assured and good outcome. 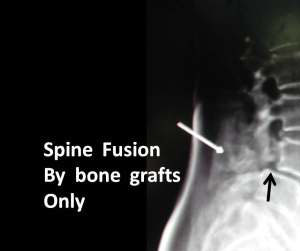 In prolapsed intervertebral discs; In acute herniation of the disc, initially nonoperative method is advised. It consists of: The effect: the swelling around the nerves, due to irritation by the disc is reduced, so the pain. The disc usually does not travel back to its place, but tends to shrivel. In about two to three weeks, one experiences good clinical recovery and slowly, one can return back to work. If the symptoms do not reduce in expected duration or some weakness in muscles is noted and if this matches with the imaging modality ( M.R.I.), then one has to consider surgery of removal of the disc. Similarly, often one gets a good relief with non-operative treatment in the first episode, but gets repeated such episodes of painful attacks. In such situations, surgical option of removal of the disc needs to be exercised. Today, with modern imaging ( M.R.I.) technique the exact disc responsible is decided and in the operation room, the site to be operated is confirmed by use of modern 'C' arm X ray machines. These steps leads to removal the exact disc responsible for the pain. Removal of the affected disc only, is the usual procedure in the young and middle aged persons. However, in elderly, if there are symptoms of spinal canal stenosis, if confirmed by M.R.I, then a complete decompression of the spinal canal by a laminectomy ( removal of the back shield of a vertebra) and may be part of facet joints is needed. Usually, if such a procedure needs to be done in two or more vertebrae, spinal fusion ( bonding together vertebrae) is done to confer absolute stability to that segment of the spine. This is also called 'spinal instrumentation' wherein mechanical devices are used to hold the vertebrae together. 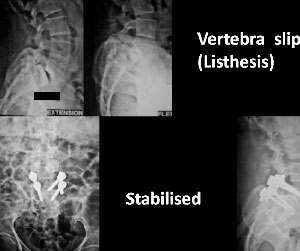 The advantages of such a procedure are: The decision of spinal fusion is taken, taking into account, patient's age, occupation, physical requirements and few other things. In osteoporosis of spine: Women in general are more affected by osteoporosis, than men. This is possibly because of impact of hormonal changes in them, which affect the bone health, more than the men. A vertebra often gets fractured, which is an insufficiency fracture. This is often, due to a trivial injury, like while travelling in a vehicle, it suddenly goes over a speed breaker, the passenger is thrown upwards and lands again on the seat. Such an impact, may cause a compression fracture in thoraco-lumber spine. Similar injury also occurs after fall in a stair or slipping on a floor and landing on buttocks. If the bone density is somewhat good and the fracture has a sound impaction, one may be able to move about to some extent. However, if the osteoporosis is severe and the compression phenomenon is less, the fracture tends to be painful and movements also uncomfortable. In such a situation, one needs to stabilise the vertebra. This is possible by injecting bone cement in the vertebra. This is a surgical procedure, carried out in operation room.Advantages: 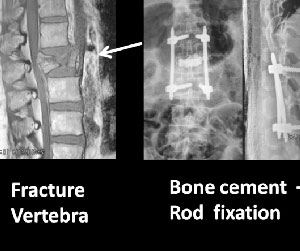 Tuberculosis of Spine: In lumber spine, the weight bearing axis is such that, in spite of presence of infection, the person is able to move about, whereas in thoraco lumber area, the pain is quite some and the patient takes to bed early and comes early for relief of pain. In yester years, in absence of a CT and MRI scan, the diagnosis was done on X ray film and by the time it was detected, the disease used to be quite advanced, including formation of a cold abscess. The patient would then present with a swelling of the abscess and if it has been in the spinal canal, loss of power in the legs was a presenting symptom. In such situations, evacuation of the abscesses and filling the void in vertebrae with bone grafting was a usual surgical procedure. This was followed by rest in bed for many weeks. As against this, currently the outlook has changed. Due to facilities of imaging techniques of CT, MR and nuclear scans, an early diagnosis is possible. At times a disease is detected so early that, to have a tissue diagnosis, quite often a CT guided biopsy is needed. If the diagnosis is confirmed, the current trend is that of early surgery, to remove the diseased area completely and stabilisation of the spine by metal devices. Such stabilisation permits a well aligned and stable spine. This radical approach, ( in doubtful cases) also permits having more tissue for pathological tests, to eradicate the disease completely and prevent recurrence of the disease. Tumours and other conditions of spine are also managed in a similar way and the details are beyond the scope of the write up.