Low back pain(LBP) is not a specific disease but rather a complaint that may be caused by a large number of underlying problems of varying levels of seriousness. The majority of LBP does not have a clear cause but is believed to be the result of non-serious muscle or skeletal issues such as sprains or strains.Obesity, smoking, weight gain during pregnancy, stress, poor physical condition, poor posture and poor sleeping position may also contribute to low back pain A full list of possible causes includes many less common conditions. Physical causes may include osteoarthritis, degeneration of the discs between the vertebrae or a spinal disc herniation, broken vertebra (such as from osteoporosis) or, rarely, an infection or tumor of the spine.

Low back pain(LBP) can be broadly classified into four main categories:

Introduction-Ankylosing spondylitis is classified along with the seronegative spondyloarthritic diseases. Ankylosing spondylitis is a chronic, systemic, inflammatory disease that affects primarily the sacroiliac joints and spine. Certain peripheral joints and tendons can also be affected, and extra-articular manifestations may be present. The disease typically affects young adults, and there are strong genetic features.

Prevalence of AS is 0.1 % to 1.4 % depending on population studied AS is predominanty seen in young Men,Women also suffer though infrequently.

What causes Ankylosing Spondylitis? The etiology of ankylosing spondylitis remains unclear. There is solid evidence pointing to a genetic component and risk. The HLA B27(Human leucocyte anigen) gene is commonly present, and there is a strong familial association. Infective mechanisms have been proposed but seem less evident than in the reactive arthritides. The spondyloarthritides, as a subset, have several distinguishing features that are shared among them. The diseases are seronegative by definition. There are common genetic factors including the human leukocyte antigen (HLA) B27 gene. Axial involvement, including sacroiliitis, can be seen in all and is essential for the diagnosis of ankylosing spondylitis. Enthesitis, or inflammatory changes of the tendon and ligament attachment to bone, is the primary pathologic phenomenon. The spondyloarthritides share many extra-articular features including uveitis, psoriasis and colitis.

What are signs & symtoms of Ankylosing spondylitis? AS is much more common in young men. Onset before age of 40 years. Initialsymtoms are usually a chronic dull pain in lower back more than 3 months duration Early morning stiffness > 30 Min. Alternate buttock pain with stiffness of LBP. Individuals often experience pain & stiffness that awakens them in the early morning. AS can occur in any part of spine or entire spine often with pain reffered to one or other buttock or back of the thigh from sacroititis. Asymmetrical Arthritis predominantly lower limbs (knees,ankle) Immprovement of symtoms with exercise,but not with rest. pain and swelling may also manifest in the ankles and feet where heel pain and enthesopathy commonly develop. Sausage of fingers or toes(dactylitis) About 40% of people with AS will also experience inflammation of the anterior chamber of the eye, causing eye pain, redness, floaters and sensitivity to light(Uveitis). Signficant family history ( AS, Psoriais , inflammatory bowel diseases(IBD),HLA B27 ). 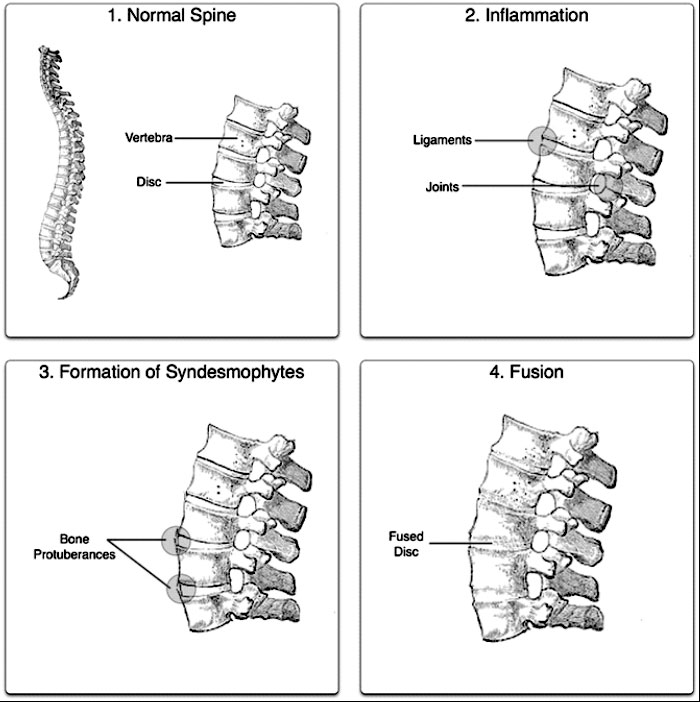 How is Ankylosing Spondylitis treated? The major types of medications used to treat ankylosing spondylitis are pain-relievers and drugs aimed at stopping or slowing the progression of the disease. All of these have potentially serious side effects. Pain-relieving drugs come in two major classes: Medications used to treat the progression of the disease include the following: Biologic Drugs-these are antibodies which attacks the immune cells or their products (like cytokines) thus biologic drugs can stop the initial disease process event and cause early improvement & arrest the disease process,which includes,Tumor necrosis factor - alpha (TNFÎą) blockers (antagonists), such as the Biologics Etanercept, Infliximab, Golimumab and Adalimumab, have shown good short-term effectiveness in the form of profound and sustained reduction in all clinical and laboratory measures of disease activity .